The so called “Our Ocean Conference”, organized every year by governments and private sector, is an event created from a complete and purely capitalist, mercantilist and financial approach, supporting the “blue growth” agenda.  This year, in Bali (Indonesia), while transnational corporations and governments will discuss financial and market based solutions for the Ocean, fisher people movements won’t be invited to participate. Thus, our voices won’t be heard in a conference which is discussing the marine environment, or in other words the resources our livelihoods and culture depend on: it is unacceptable!

Indonesian fisherfolks, coastal communities and their allies of CSOs are organizing their own event, the “Ocean People Conference”, to fight back against ocean grabbing and for food sovereignty (https://www.facebook.com/oceanspeopleconference/).

WFFP fully supports the initiative of its member KNTI in the organization of this event and we share below the statement of Indonesian fisher peoples and CSOs. We reject the Blue Economy framework of International financial institutions and Transnational Corporations, which promote ocean Grabbing, disposing small scale fisher from their resources, and undermines the livelihoods of coastal communities.  We reject the framework of the “Our Ocean Conference”: selling the ocean won’t save it. We are the Ocean, we are the people!

Our Ocean Conference: Selling the Ocean to save it?

The government of Indonesia will organize the so called « Our Ocean conference » on 29-30 October 2018. This conference is organized annually by governments, corporations and international institutions. These actors gather to implement Blue Economy, Blue Growth, Blue revolution … or in other terms financialization and privatization of the Ocean. This year the conference is organized in Bali, Indonesia, without the participation of small-scale-fisher movements, while the whole life of fisher people depends on ocean resources.

Indeed the OOC Conference will push for false solutions such as Blue Carbon and MPAs, undermining the livelihoods of coastal and small islands communities, and thus marginalizing them. Property right-based fisheries global frameworks are violating fishers human rights. Moreover, extractive industries and coastal privatization destroy the ecosystems communities rely on, finanzialisation of waste and water management exacerbates these two issues. Furthermore, women and youth are already marginalized within fishing communities, but will be further impacted by the overall false solutions pre-quoted. Indeed, the OOC Conference does not mention gender as a crucial issue. It shows clearly the lack of recognition of the women’s identity and their significant role in marine and fisheries.

For all of the above reasons, representatives from small-scale and traditional fisher peoples living in coastal and small islands together with coastal community based CSOs decide to organize, the “People’ Ocean Conference”, to develop real solutions of an ocean managed by the people. While governments will promise billions of financial pledges to keep on destroying the ocean and its fishers, people from all over Indonesia and their CSOs allies will gather to speak up about ocean grabbing and discuss about real solutions together. Indeed, the 6 subjects of the “Our Ocean Conference” will be counteracted during 6 participatory workshops:

People’s Ocean Conference will be a participatory event and will result in the People’s Ocean Declaration. Governments and corporations say “our ocean our legacy”, but we say “peoples’ ocean, our common”.

Organizers of the Ocean’s People Conference: 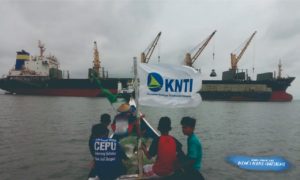