Today the Inland Fisheries Working Group of the World Forum of Fisher People (WFFP) Is standing with brothers and sisters of other peoples’ movement at the 2018 Alternative World Water Forum to call for the protection of the waters that support the life of our communities, livelihoods and cultures.

The Inland Fisheries Working Group was given a mandate at the 2017 General Assembly of the WFFP in Delhi to coordinate a global strategy in support of the struggles of inland small-scale fisher peoples (SSF).

Inland small-scale fishing communities have a special relationship with the lakes, rivers and wetlands they depend upon, which they have managed according to customary tenure for thousands of years. These waters are now being threatened worldwide by untrammelled industrial development, pollution, privatization and oppression.

The Inland Fisheries Working Group calls on governments to protect inlands fisheries and their habitats, in accordance with the FAO Small-Scale Fisheries Guidelines and Tenure Guidelines, which more than 150 countries have signed at the United Nations. Policies relating to inland fisheries should also adhere to the United Nations Declaration on the rights of inDigenous PeoPles (UNDRIP), requiring free, prior and informed consent before decisions are taken that affect Indigenous inland fisheries.

In addition governments are implementing false solutions aimed at reducing carbon emissions and clean energy, which are not involving small-scale inland fishing communities, and even remove them from their traditional territories.

Today the WFFP Inland Fisheries Working Group is here at the Alternative World Water Forum raise the voices of small-scale fisherfolk whose lives and livelihoods are interconnected with inland water bodies. We reach out to all peoples’ movements that are fighting to protect inlands waters, to forge a common struggle to fight for the lakes and rivers that provide us with our lives and livelihoods.

Together with our allies we assert that the right to water, land and food is fundamental to the dignity and well-being of inland fishing communities, and we will defend our rights and food sovereignty, with our allies from other social movements. 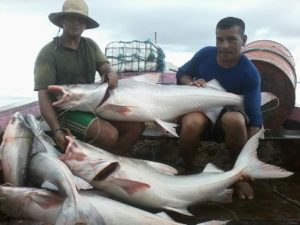 Amazonian fishers with Piraiba, a species threatened due to large dams built on the Amazone river.