The World Forum of Fisher Peoples (WFFP) is celebrating the International Day of Action for Rivers by calling for governments to implement the FAO’s International Guidelines for Securing Sustainable Small-Scale Fisheries (SSF guidelines) for rivers and other inland fisheries, and to develop policies to protect the rights of inland fishing communities, and ensure their food sovereignty. 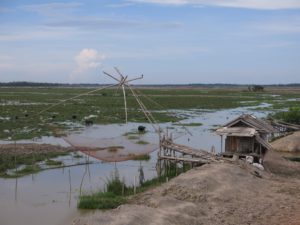 At least 30 percent of the global fisheries catch is from inland fisheries, and almost the entire catch is caught by small-scale fishers. In many countries such as Bangladesh and Uganda, and for many Indigenous communities, small-scale fisheries are predominantly inland and provide the most important source of animal protein and micronutrients. As such, inland fisheries make up an important component of global food sovereignty.

Although inland small-scale fisheries face many of the same challenges as marine fisheries, there are issues, which are specific to inland fisheries. Degradation of freshwater fish habitats caused by hydropower dams, urbanization, tourism, industrial aquaculture, invasive species and pollution is evident all over the world. The traditional knowledge and cultural practices of inland fishing communities are often neglected, and few countries have fisheries policies related specifically to inland fisheries. This lack of policy frameworks that protects the fishing communities and the environment, coupled with business interests of transnational corporations, makes the inland fishing communities vulnerable to land and water grabbing. Sixty percent of the world’s freshwater falls within a transboundary basin, where these conflicts often happen.

Around the word, small-scale fisher movements are challenging these threats to their livelihoods, food and way of life.

Bangladesh is fourth largest inland freshwater fish producer in the world. Fish contributes about 4% to its national GDP, and it meets 60% of total protein demand of the country of which the majority comes from inland fisheries. Close to 20 million people are involved in fisheries in the country.

According to Mohammed Mujibul Haque Munir of Coast Trust in Bangladesh, “One of the major problems faced by the small scale fisher people is the lack of legal recognition by the policies and laws regarding the fisheries sector. A mechanism is yet to be implemented to identify who are actual small-scale fishers and since there is no clear identification, some influential individuals are grabbing benefits and fishing grounds from the service providers [the state], by signing lease contracts with the government, in the name of the fishing communities. Rivers and other water bodies are becoming dry due to climate change, salinity intrusion is increasing, numbers of species are declining and mangroves are being destroyed.”

In South Africa, as Carmen Mannarino, from Masifundise explains, Inland small-scale fishers are still struggling to have their human rights as fishers recognized. Colonial and apartheid rule made rivers, lakes and dams the realm of an elite minority, and in the recent decades have become dominated by recreational fishers, while SSF fishers’ livelihoods remain criminalised until today.

“Fish from rivers is extremely important for local food sovereignty. Accessing our waters is difficult, but we have the right to be recognized. It is our duty to protect rivers and inland waters. Doing so preserve important evidence of our ancestors’ past” explains Clarence Oliphant, traditional kraal fishers from Northern Cape and member of Coastal Links South Africa.

In the Western Canada, Indigenous Peoples struggle to protect the rivers and wild salmon habitats in their territories. According to Dawn Morrison, of the Secwepemc people, in western Canada, and Chair of the Working Group on Indigenous Food Sovereignty,

“The westernmost province of what is known to the settlers of Canada is home to 27 nations of Indigenous peoples whose bio-cultural heritage is intimately intertwined with the vast network of rivers and streams that have laid the gravel for some of the largest remaining salmon spawning grounds in the world. Wild salmon is our most important Indigenous food and a cultural and ecological keystone species, and is thereby an indicator of health for Indigenous land, people, plants, and animals that rely on them for our food. In turn, the health and abundance of the wild salmon is intimately interdependent with our ability to protect their habitat in the watersheds where they spawn and migrate to the ocean and back again to complete their amazing life cycle.

The health and quality of the water of the 5 major rivers in British Columbia are being threatened by risks associated with industrial projects such as oil and pipeline, mining, liquid and natural gas, hydro-electric dams, open net cage salmon feedlots, and unsustainable agriculture practices. Grassroots people of all creeds and cultures are coming together with Indigenous peoples to protect the water and wild salmon habitat outside of the divisive political system and socially irresponsible corporate control that is motivated by profit and greed over ecosystem values, health and wellbeing.”

In Pakistan a massive mobilization of inland small-scale fishers is being organized by the Pakistan Fisherfolk Forum (PFF). Pakistan is another country with a huge inland fishery, with more than 2400 lakes, including Manchar Lake, one of Asia’s largest lakes as well as the Indus River, one of world’s greatest watersheds. Pakistan’s inland fishery is made up of more than one million fisher people, and is a key source of food and livelihoods to many more. The Pakistan Fisherfolk Forum has mobilized Fisherfolk to confront the serious threats facing the inland fisheries such as industrialization, tourism, dams, and loss of freshwater.

According to surveys done by the PFF, more than 50% of the inland fisheries resources are lost in recent years. To bring awareness and action to this crisis, the PFF has organized a protest march through 15 districts in the Sindh Province form the 1st of March to the 15th of March, with rallies of more than 2,000 in each community and culminating in a rally of more than 6,000 at the mouth of the Indus. The campaign will have engaged more than one million people and involve legislators, politicians, media and allied social movements.

As Mustafa Mirani, the Vice Chairperson of the PFF puts it, “If we do not take control of the future and protect our inland water ways and fisheries, we will lose our inland fisheries completely.”

The inland fisheries working group of the World Forum of Fisher Peoples call upon governments to ensure that the human rights of inland fisher peoples – including women, youth and Indigenous Peoples – are protected, and that the International Guidelines on Securing Sustainable Small-scale Fisheries are applied in the inland fisheries context to develop progressive policy frameworks.