New report produced by fisher movements from across the world. The report challenges the political and economic elites and their project to privatise our nature through the Blue Carbon mechanism of the United Nations Framework Convention on Climate Change and the Paris Agreement. It also emphasises a series of real solutions which are rooted in the knowledge and culture of fisher peoples. 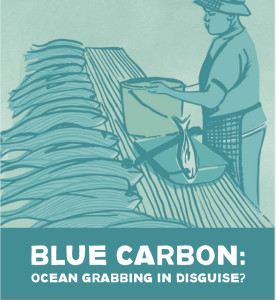 Blue Carbon proponents highlight the need to protect wetland areas because of the ability of such ecosystems to act as carbon sinks. The political elite who gathered in Paris for COP21, are looking for ways to include wetland areas in mitigation efforts aiming to lessen the impact of global CO2 emissions. They argue that the best way to address this is through the introduction of market-based mechanisms similar to those aimed at forests (e.g. REDD+). Investors are then offered the possibility to invest in them, and in return, they receive ‘carbon credits’, which can then ‘offset’ carbon emissions elsewhere.

This fundamentally changes nothing, but instead entrenches the status quo through yet another market-based solution, whereby pollution and environmental destruction can continue in one place as long as wetland areas are protected somewhere else.

As expressed by Herman Kumara, the national convener of the Sri Lankan National Fisheries Solidarity Movement (NAFSO), it is critical that we “… fight against the Blue Carbon mechanism and other false solutions of the UNFCCC…  We have to fight the evils of capitalism and one of our tools in this fight is the International Guidelines on Securing Sustainable Small-scale Fisheries.”