In 1988, the United Nations established the Intergovernmental Panel on Climate Change and since then leaders of the world have met year after year to discuss how to combat climate change. Today, we have to conclude that the leaders have failed. When they meet in Paris for COP21, we now what to expect: their proposals to combat climate change builds on privatisation and financialisation of nature and in the specific context of fisheries, the new false solution is called Blue Carbon.

Blue carbon projects will create a market for the ‘service’ provided by wetlands: carbon storage and carbon credits:

Since the World Ocean Conference in 2009, there has been an increasing focus on how wetlands (mangroves, tidal marshes and seagrass meadows) are vitally important to combat climate change. Through natural processes, wetlands capture and store carbon and these areas can therefore lessen the impact of global GHG emissions. This ‘mitigating’ ability has meant a huge focus on ‘protecting’ these areas through ‘blue carbon projects’ as a tool in the efforts to lessen global GHG emissions. Blue carbon projects need to be seen as part of the larger push for false solutions through privatization, financialiszation and “green washing”, as we have seen especially since Rio+20. In Rio, the idea that we need to “sell nature in order to save it”1 was pushed forward stressing that nature would only be fully appreciated and protected if we put an economic value on it.

The public meeting will be one of the very first events to address the Blue Carbon mechanism from a critical perspective. Mr. Riza Damanik, the Chairman of Indonesian Traditional Fisherfolk Union will provide a critique from the perspectives of small-scale fishing communities. Mr. Damanik participated in a Blue Carbon assessment study in Indonesia since 2010, and has experienced first hand how UNEP and the Indonesian Government see Blue Carbon as an opportunity for a renewed capital influx. The moderator will open up for a conversation between Mr. Damanik and the audience.

The presentation by Mr. Damanik will be followed by panel sessions with frontline leaders of fisher organisations from Honduras, Canada, Kenya, South Africa, Spain, India, Sri Lanka, Bangladesh and the Caribbean.

The meeting is co-hosted by WFFP, World Forum of Fish Harvesters and Fish Workers, Transnational Institute, Afrika Kontakt, FIAN International and Focus on the Global South. 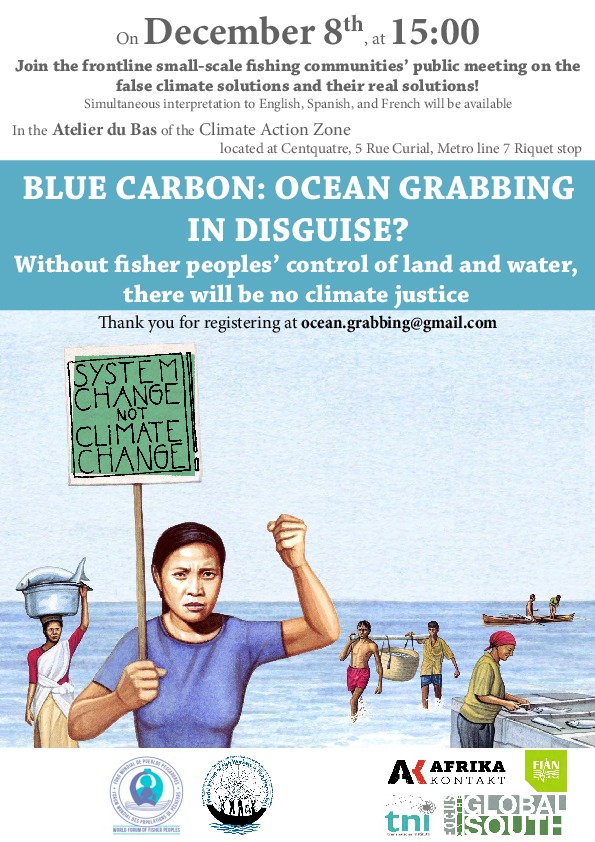