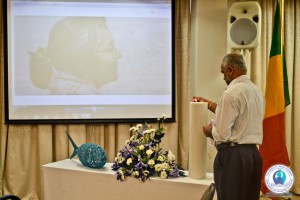 “To come to pay tribute to Thomas Kocherry here today is indeed an honour, but believe me it is an extremely daunting task as it brings in one feelings of sadness.  But the greatest source of comfort we can deal with is not grief here today, but gratitude for what he has done and to remember his work and to keep his vision alive and also to remember his supportive friend Harakrisna Debnath.

We travelled many places together attending conferences and forums. I had journeyed with Thomas for the first time in 1997 in Europe and I was sceptical about this journey and went along not having complete trust in him – a priest – a Jesuit priest at that – a lawyer, social activist – and a person stern to view. My perceptions are that religious priests are not democratic people.  I came away respecting him, most importantly that of being one that valued others more than he valued himself. There is a very old war saying that when the world is in turmoil, insecure, surrounded by hate, violence and dissension and is in downward spiral there are three people who together can save it.

Thomas had two of these attributes which were his most wonderful virtues. He was in conflict with the warrior side as through his beliefs that the idea of using force against another was not part of his consciousness. This was none more evident when after being involved with FIAN in Rome we for the first time at COFI partook as representatives of the fishing communities, he surprised us all by his verbal outburst and criticism on the violence in the Gaza strip. We had struggled to get seats for our presentation within the general assembly, finally being seated amongst the rear of the accredited members and to this day I still believe that this led to the NGOs being passive participants seated on the outer wings.

Thomas and I were from vastly different ideologies and also in our behaviour, and there many times we argued and were in conflict, yet we both respected each other and continued to work closely together which shows the type of person that he was, we realized that in fact we complimented each other. He tried to convert me, even taking me to a priest in Rome where they said a long pray over a Bible draped with a purple cloth. But the important gift was of good books and this did have beneficial results. Knowledge is truly empowerment.

Moreover he was the main person who brought us fisher folk of the world together.

I am going to read phrases out of one of them which we all should see as the essence of his struggle to bring about change;

It was his goal and purpose in life to attempt to rectify this reckless and riotous behaviour in the world and to support the vulnerable fishing communities of the world through the establishment of the World Fishing Forums.

You that are here today owe it and have a duty to see that the vision of Thomas and those founding members are the backbone of your decision-making and to carry forward the admirable work so far achieved.

May he Rest in Peace.

There is a saying by fisher folk:

LIFE WITHOUT PURPOSE IS BARREN INDEED.

THERE CAN’T BE A HARVEST UNLESS YOU PLANT SEED.

THERE CAN’T BE ATTAINMENT UNLESS THER’S A GOAL

IF WE SEND NO SHIPS OUT, NO SHIPS WILL COME IN.

This is why you are here today so I wish you all of the best in your endeavours and decision-making to challenge the unjust establishments and work to initiate societal changes that will bring about a better life for our various fisher folk.